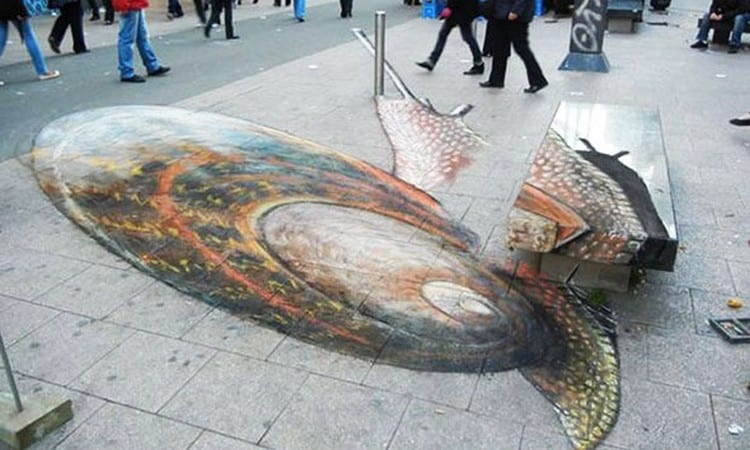 Art has come a long way since the early days of two-dimensional cave paintings, and it wasn’t until the Italian Renaissance that we started to incorporate concepts like perspective into our artistic works. When you look at a picture of something that looks three dimensional, you see the optical illusion of forced perspective. The artist was able to force your mind to believe that what you’re seeing has depth even though what you’re staring at is a two-dimensional surface. This forced perspective is particularly impressive with 3D street chalk creations.

The following are some of our favorite examples of amazing 3D street chalk art.

The 3D design of a giant drawn by Kurt Wenner holds the world record for the largest image of its kind designed and drawn by a single artist.

Can you imagine standing next to this piece of art? The dimensions used are amazing!

Phaeton is a 3D street chalk creation designed on the street of Salamanca Fiesta, Salamanca, Spain.

The design has a golden color, and it shows horses and humans falling into a pit.

The star mild is an amazing, breathtaking design from the “Master Madonnaro” Manfred Stader.

This sidewalk art is a colossal figure similar to the lava burst.

The design is a realistic cup of cappuccino painted outside the restaurant.

This painting is one of the most magical street illusions from Julian Beever. The artwork is one of the reasons why Julian is considered a leading chalk artist.

The chalk design shows the class and talent of the artist.

It is one 3D street chalk drawing that is worth seeing over and over if it didn’t wash away!

This art is a high street illusion designed by Julian Beever.

This design is one of the anamorphic illusions of a cleverly designed and constructed 2D image looking like a 3D image when seen from the right angle.

Just like the Crevasse street painting, Edgar Muller’s waterfall design is an image of a giant hole revealing a dramatic scene. This anamorphic work was created on River Street in Moose Jaw, Saskatchewan, Canada, in July 2007.

This artwork was made for the Prairie festival, and it was the biggest 3D painting as at the time. The design covers about 3000 feet. Some local artist also assisted him in completing the project.

The 3D chalk drawing is impressive and aesthetically pleasing. It is one of Edgar Muller’s most intriguing 3D street chalk drawings.

The Lava Burst illusion is an excellent work from Edgar Muller, but people liked the Ice Age illustration better, even though it was similar to the lava burst. Instead of the lava hole in the previous design, the popular Ice Age theme and characters were used.

This is one of the best works from Julian Beever. The snail art looks like an unfinished work, but when you look at it from the right angle, you see the image magically snaps and looks more real.

Julian Beever used the anamorphosis process to get the three-dimensional image.

This is an amazing 3D painting by Edgar Muller. This 3D design is in Dun Laoghaire, Ireland, and spans for about 250-square meters. Edgar Muller needed five days and five helping hands to show the fault in the earth crust.

The effect is one of the best 3D paintings you might come across.

The Lava burst is an outstanding 3D street chalk creation designed by Edgar Muller. This work surpasses Julian Beever artwork by more than an inch, and the design depicts disaster in the street.

This design is a perfect 3D design from Edgar Muller, and it unforgettable.

Some Netherland-based street artists designed Planet Streetpainting. The painting reveals the history and connects the historical event with modern happenings. The Terracotta Warrior painting depicts the armies of the first Emperor of China Qin Shi Huang. The distinct feature of the work is that Lego figures were used as models instead of Chinese statues.

It is one of the most impressive 3D street chalk paintings in the world.

The Reebok Crossfit Canyon holds the world record for the biggest 3D painting in the world. This painting is 1,160.4m square and 106.5 long showing wonderful waterfall and deep canyon images.

This masterpiece is brilliant and stands out among other 3D street chalk creation.

Watch the making of this masterpiece: