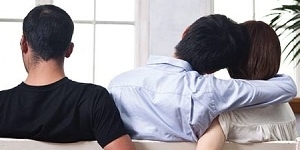 Image Credit: Jmackagency.com
We as a society are generally mature, even-tempered people. For the most part, adults take the challenges that life throws our way in stride and handle them with quiet dignity behind closed doors. But sometimes… well, sometimes you just have to go off and shame the person who has wronged you in a very public and superbly immature way. After all, how else is everyone going to know that you were not the one at fault for the relationship souring unless you’re willing to embarrass your significant other with a hastily planned, newsworthy public act of retribution?

Well, it’s safe to say the emails in question probably didn’t feature funny cat videos or the latest update of the office birthday calendar. In any case, this husband took it upon himself to hopefully stop any real cheating before it began by ending another man’s digital relationship with his wife with the help of a trusty can of spray paint. Not only did he tag up the doors, but he also completely took it to that outdoor light fixture. No mercy. No sconce left un-sullied.

The best part about this public shaming is knowing that she took the time to visit her local Fedex-Kinko’s to have this banner printed up. She chose some subtle variations in font size and color for emphasis, and she even elected, perhaps in an attempt at irony, to include a lovely rose accent. And while the banner is great, someone should probably let her know that since he cheated on her, she has all the leverage and not only can she make him move out, but she can more than likely take from him everything he has ever loved.

In another case of a banner hung out front, this person took the simpler route and just spray painted an old sheet. It’s a more subtle approach, but it’s still just enough to assure that whomever it’s directed towards will know it when they see it. And let’s be honest, if you pull up to your house and see this hanging outside, you just accept that you’ve been busted and keep on driving. Even if it’s not about a relationship, and it’s just your roommate’s way of letting you know that he knows you used codes to beat his high score in Contra, it’s probably best not to walk in and face that shame.

You’ve got to respect the revenge dedication and prowess of anyone willing to take out public ad-space to make it happen. You’ve also got to love the idea that every other guy named Ryan in this town was crapping his pants before he remembered that his wife’s name wasn’t Heather. In the end though, it’s the devotion and monetary commitment involved in this plan that makes it an undeniably admirable one. Though someone should let Heather know just how limited a scope suburban billboards reach, and that she might be better served investing in a short TV spot if she’s really trying to spread the news.

Wow. This guy just… well he’s the best. While his revenge wasn’t over an issue of cheating, at least not as far as we can tell, he didn’t let that stop him from going all out. After his wife served him with divorce papers, this gentleman decided to take the road less traveled. He didn’t call her a whore, or try to badmouth her to all the people in their lives. Instead, he elected to fill her hot tub with manure, because he’s obviously an evil genius. No one wants to use a hot tub after it’s been chock full of cow crap, that thing is as good as useless. And if that weren’t enough, when police caught him in the act he fled on a tractor and led them on a low-speed chase that ended with him getting pepper-sprayed.