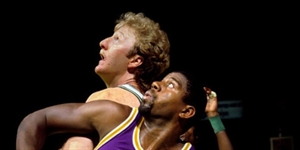 A team is only as good as its leader on the floor, and often times, that comes down to who is bringing the ball up the court. A true point guard is the quarterback of the basketball team, piloting them through the game, orchestrating their every move and facilitating their overall success. A great point guard isn’t just a skilled ball-handler who can hold up a finger or two to call out a play, a truly great point guard can do it all. He’s a passer. He’s a scorer. He’s a staunch defender and precise decision-maker. Most importantly, he knows what it will take to win, and he does a little bit of everything to make it happen.

He’s only 27 years old and his career is far from over, but Chris Paul has earned a spot on this list. Possessing a motor and a desire to win that is seemingly unparalleled, Paul took home the NBA Rookie of the Year award in 2006, and he’s only been getting better since. He’s made five All-Star appearances, and been named to the All-NBA and All-Defensive Teams every year since 2007. In eight years, CP3 has led the league in assists twice, steals five times, and never averaged less than 16 points per game, all in spite of standing just 6-feet tall (on a good day).

The original point-guard, Cousy’s style of play became the prototype for every man that played the position after him. As pure a passer that the game had ever seen, Cousy led league in assists for 8-straight seasons from 1952-1960, a span in which he also averaged no less than 19 points per contest. He played the role of conductor on a legendary Boston Celtics team that won six NBA Championships, went to 13 All-Star Games, made the All-NBA Team 12 times and won the NBA Most Valuable Player Award in 1955. Every aspect of Bob Cousy’s game was a marvel to behold, rightfully earning him the nickname “Houdini of the Hardwood.”

The man they called “Big O” was the kind of player you’d model the perfect basketball robot after. He was a pure scorer, a slick passer and an absolute ball-hawk. Robertson’s astonishing all-around game led him to twelve All-Star appearances, eleven All-NBA Team honors, one MVP award and an NBA Championship in his fourteen-year career. Perhaps most impressive though, Big O is still the only player in NBA history to average a triple-double for an entire season, posting an insane 30.8 points, 11.4 assists and 12.5 rebounds per game in just his second year in the league!

In his time spent with the Utah Jazz, John Stockton put together a stat line that will forever be used as a shining example of a “true point guard.” Playing nineteen years in the league, Stockton is still one of only two men to hold a career assists per game average in the double-digits, and he set the all time total assists mark, a record he comfortably holds with almost 4,000 more dimes than the next closest player. Stockton was also a respected scorer and defender, averaging 10+ points per game in every year but his first three, and setting the NBA’s all-time steals record with 3,265.

He may have been built like a small forward, but Magic played the point because the man could simply do everything. Playing floor general for one of the greatest dynasties in league history, Magic led the league in assists per game four times and never averaged less than 16.8 points per contest (minus his brief comeback in ’95). His career achievements include three MVP’s, twelve All-Star games and ten All-NBA Team nominations. But Magic shined the most when the lights were brightest, leading the Lakers to an unreal five championships in nine Finals appearances and earning three NBA Finals MVP’s.
Sources: