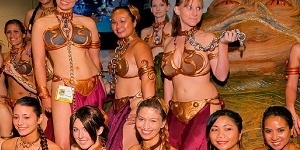 The San Diego Comic-Con is often used as fodder for late night shows that crack jokes about it being the world’s single largest gathering of guys that live in their mom’s basements. But the fact of the matter is it has truly become one of the year’s largest and coolest events.

With the popularity of supposed “nerd culture” growing in recent years, Comic-Con is the ultimate place to show off your fandom. Year in and year out, rabid fans prove just how dedicated they are not only by sitting in line for 7 hours to see a panel on a show that was “unjustly” cancelled ten years ago, but also by constructing some of the most creative costumes you will ever see. 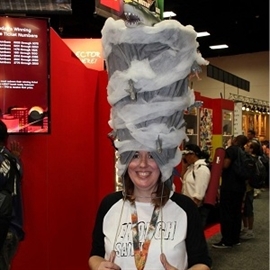 It seems the SyFy channel struck pop-culture gold with its recent and ridiculous made-for-TV movie featuring the bite-iest weather phenomenon the world has ever seen… the “Sharknado.” Not only did a tornado full of sharks work as the prefect metaphor for star Tara Reid’s career, but it also caught on big-time with fans of hacky sci-fi everywhere. One of which included this lady, who has built the world’s only 20lb. hat that is absolutely worth wearing. 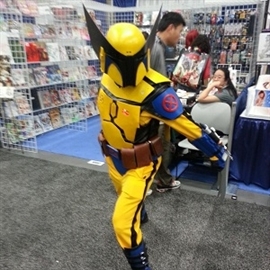 Each year, amongst some of the very best getups on display at Comic-Con, is at least one insanely random combo costume. It’s the ultimate creation that happens when a fan’s conflicted love simply won’t allow them to choose between their two favorite characters, and the result is some brilliantly insane hybrid. This year’s winner for the ultimate nerd-gasm combo… Boba Fett-Wolverine. It’s part badass mutant, part ultimate bounty hunter, and all unstoppably awesome. 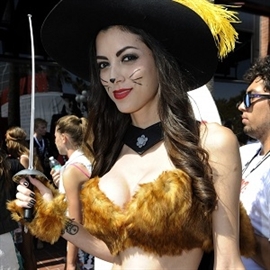 Comic-Con may often be thought of as a total dude-fest, but plenty of women take to the floor, and often in some seriously eye-popping outfits. Some consistently revealing choices that show up each year include skimpy Wonder Woman outfits and of course, the slave Princess Leia bikini. The Antonio Banderas-voiced, swashbuckling feline from Shrek however, doesn’t usually crack the list of sexiest Comic-Con costumes. At least it didn’t until now, when woman took it upon herself to set the record for most creepy stares at a CGI housecat-inspired costume. 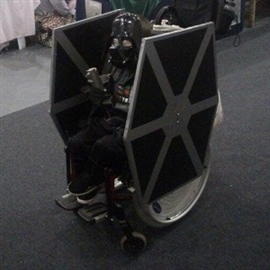 This one is simply impossible not to love. Star Wars costumes are perhaps the most prevalent and overdone each year, but this is more than just some dude walking around in a Storm Trooper outfit. In fact, this might be the single greatest Star Wars ensemble in the history of Comic-Con. We give you, the rolling TIE fighter. This devoted and creative fan converted his own wheelchair into one of the most badass and iconic pieces of weaponry in sci-fi movie history, and for that, he deserves a serious round of applause. 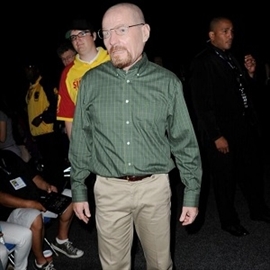 Yes, you read correctly. The winner of best costume goes to a guy who dressed as mild mannered chemistry teacher-turned meth kingpin Walter White from AMC’s Breaking Bad. And yes, the costume involved nothing more than adding a Heisenberg mask to a boring plaid shirt and khaki combo. So why on earth is this the best costume at Comic-Con? Because behind that mask and unassuming outfit, was Walter White himself, Breaking Bad star Bryan Cranston. Cranston walked the Comic-Con floor wearing a mask of his own face, going went completely unnoticed until he revealed himself at the Breaking Bad panel. And that’s just the kind of subterfuge that will earn him the eternal love of nerds everywhere.

Must Read
Five To-Go Storage Devices To Keep Your Fruit Fresh
Cat Only Accepts Food In A Bag, Mom Sets Up Camera
Bride Transforms, This Is What She Looks Like Now