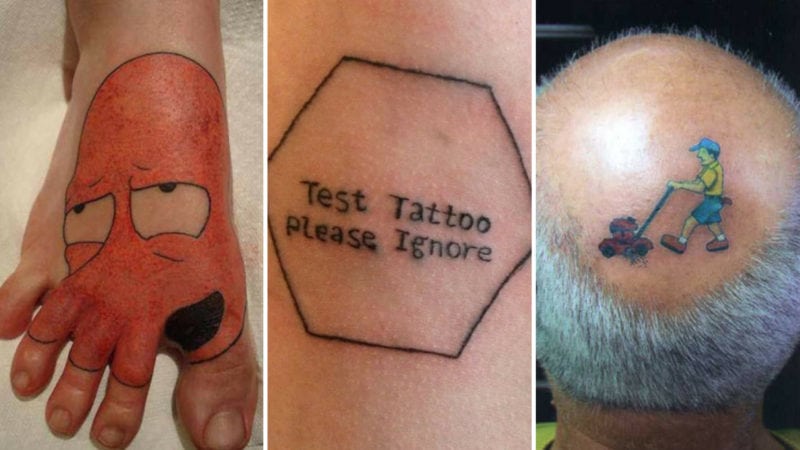 Tattoos today are no longer limited to anchors and symbols, they are an art form showing creativity and meaning. Getting inked is a way to make a statement and show your individuality and personality.

If you have a good sense of humor and love to make people laugh then you might consider getting some funny tattoos. Why not make your friends laugh, your mom laugh and even your tattoo artist?

Can you believe people really permanently chose to do these funny tattoos?

1.) Literally A Lower Back Tattoo

The tattoo artist may have taken this literally when asked to design a lower back tattoo.

Y’know just in case you forget what it is.

Moon Landing is one of man’s greatest achievements. In 1969 Neil Armstrong became the first person to step onto the lunar surface.

This clever tattoo pays homage to that moment in a humorous way.

Well, you’ve got to try before you buy right?

However, this tattoo can’t be taken back unless it gets lasered off.

This tattoo is actually really cute despite not making much sense.

I’d like my pizza with extra cat toppings, please.

This funny tattoo is of Dr. Zoidberg a fictional character from the hit animated television show Futurama set 1,000 years in the future.

Dr. Zoidberg is a lobster-like species of alien. The tattooed toes work perfectly as a representation of Dr. Zoidberg’s feet.

The Marvel Universe is a fictional universe where most American comic book titles take place. Ant-Man is a is a member of the Avengers with the ability to shrink to sub-microscopic size.

This tiny tattoo has been brilliantly designed to make you laugh.

A beautiful poem to cherish and stay with Dave always tattooed on his back:

These elephants look hilarious with the added comedy eyes. The baby one with the wonky eyes… I can’t even!

Everything is better with googly eyes.

This person is showing their fun and cheeky side with this tattoo.

The composition of this tattoo is genius!

A foot soldier, someone that fights on foot. This tattoo has been brilliantly designed to represent that.

Each toe has been given its own character. Each of them poised and ready for action.

The true form of this tattoo can’t be seen until the hand is placed in the right position.

With the finger designed as the trunk, the motion of the finger can be used to bring the elephant to life.

Ah so that’s where his hair disappeared to, the small man on his headed mowed it away.

He obviously sees the value in making others laugh.

This creative tattoo design combines ink and body hair in a clever way.

A  fun and whimsy tattoo that can only make you smile.

A 3D tattoo design that will make you look twice to make sure that it’s not real.

A bionic man in the making.

This hyper-realistic zip tattoo plays a trick on the eye with its life-like design.

The zip design looks more like a photograph printed onto skin than an actual tattoo.

Science fiction has come to life with this USB Ports for humans.

This 3d tattoo design looks so real you could convince someone you were actually a robot.

This funny tattoo certainly messes with your head.

I think they may regret getting this done in a few years.

At least it can be covered up with pants.

This is amputee is someone that looks on the bright side of life and has a dark sense of humor.

The other leg may be gone but it’s certainly not forgotten.

It’s everyone’s nightmare to get a tattoo then realize that it has spelling mistakes. Once it’s done there’s no going back.

This is a great example of making light out of an awkward situation.

This may be taking the love of Oreos too far. Barcoded for life!

Do you think they had to pay at the self-checkout?

This bit of tattoo mastery is an artistic masterpiece in disguise. Join the dots to reveal the design.

Not only is it a clever tattoo it’s also a drawing exercise.

This is a clever tattoo. He’ll never lose his pen again and always have it with him now. Shame it doesn’t actually work.

How many times a day do you think people ask to use his pen?

The goat was so hungry it ate all the hair!

26.) This Little Piggy Went to Market

This little piggy went to market, he won’t be back again but he was nice enough to leave a sign.

Such a witty design!

27.) Cut Along The Dotted Line

Webbed toes are the fusion of 2 or more digits of the feet. This tattoo highlights the issue but in a playful way.

The design resembles that of a craft tutorial instructions.

They may have a finger missing but their humor is still intact.

If you are a girl and you ever wanted a mustache, this is the perfect tattoo for you.

How many times does she show this on a first date?

Are the tattoos still there when she is asleep at night?

Have you ever wish your hair would clip themselves?

Well, too bad this isn’t real.

Wait, is this a double negative?

This is a great example of thinking before.

We all have days when we don’t put on deodorant.

This girl is embracing how smelly she gets.

If he doesn’t want to see you, he can insult you and cover his eyes.

It’s a creative way to ignore everyone.

Teenage Mutant Ninja Turtles. Heroes in a half shell.

This is a creative way to say, “Hey! I can’t hear you. Speak louder!”

If you don’t like your belly button, this is the perfect way to fix it.

It won’t hide it though!

We suppose if you’ve got a thing for the old-school death punishments, these might be perfect for you.

The interesting message you’re sending to your audience, though.

This is intentional, it has to be. Nice play on something you don’t do very well – a great reminder!

Did you plan to have a great job in the future? Uh-oh…

How romantic. A tattoo of a woman’s name covered up with the word “VOID”. I’m sure his next girlfriend will love it.

Do you think he’ll get his next girl’s name tatted on him?

We only count six dwarfs, and traditional there are supposed to be seven aren’t there?

Guess where the 7th one must be. Enter if you dare.

For those that high on the family tradition this is one way of getting the message across.

Plus there is no need to worry about growing a mustache and keeping it trimmed either. Saving a few bucks here.

Have you ever wondered what would happen if Pacman had a gun?

Well, he kills the ghosts that try to eat him.

This tattoo may be perfect for some who has the same to-do list every week.

Of course, you can write your own in.

There is no flow to this poem.

We wonder if he got this tattoo as a dare or because he felt inspired.

The tattoo on the left side was a mess. This person was smart to get it redone with the real Pikachu.

It’s pretty neat that a funny tattoo turned into a masterpiece.

If you are a big Spongebob fan, this funny tattoo is creative af.

Patrick is how we feel on a daily basis.

If Conan O’Brien was bigger and had long hair, he would look like this.

We want to know who came up with this idea for this.

The way the tattoo is placed, it looks like this guy was trying to be Harry Potter.

Too bad he couldn’t vanish out of jail.

Microblading and tattooing your eyebrows is the trend nowadays.

Unfortunately, this isn’t in style.

In this case, it might be safe to say that beauty is in the eyes of the beholder.

The tattoo is lifelike, but hopefully, they can hide this on their body.

It gets the message across who is the boss here.

For those that want to save on a few pieces of clothing and want to make a fashion statement then this form of tattoo does it all.

Love it or hate it?

What a way to embrace the problem of balding.

Or did he shave half his head for this tattoo?

Now someone viewing this tattoo may be asking themselves:

Does this guy really like cheeseburgers, or does he consider himself as one?