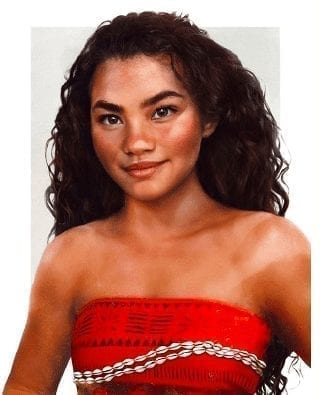 Animated Disney movies: We all have our favorites! But while they’re beautifully drawn, have you ever wondered what your favorite 2-D Disney characters would look like as actual humans?

If the answer is yes, artist Jirka Vinse Jonatan Väätäinen just made it easier for you to elevate your Disney fantasies. This talented guy has whipped up some stunning portraits of the most iconic Disney characters as real people!

Belle From Beauty and the Beast Before

I always felt it was fitting that her name is Belle, because she is so beautiful. Belle was GOALS when I was a kid.

Belle From Beauty and the Beast After

Prince Adam (AKA Beast) From Beauty and the Beast Before

Sometimes it’s hard to remember that Beast was a human and that his 2-D human form was pretty easy on the eyes. But wait ’til you see this next photo.

Prince Adam (AKA Beast) From Beauty and the Beast After

I see no Beast in this photo; only BEAUTY!

Gaston From Beauty and the Beast Before

Gaston has always been ‘swole.’ His jawline has always looked like it could cut diamonds! And yes – I am aware his looks don’t match his ugly insides.

Gaston From Beauty and the Beast After

Moana From Moana Before

Moana’s brows are always on fleek, and it makes me jealous!

Moana From Moana After

Ariel From The Little Mermaid Before

Ariel’s fiery red hair started a trend for hipster girls everywhere, and we salute her for it!

Ariel From The Little Mermaid After

We know plenty of people who would want her to be part of their world. Stunning in 2-D and 3-D? Both with a tail? No fair!

Prince Eric From The Little Mermaid Before

Prince Eric has always been a stud. That perfect hair…swoon.

Prince Eric From The Little Mermaid After

OKAY ERIC, I SEE YOU. He went from perfect hair in 2-D, to perfectly tousled in 3-D.

Ursula From The Little Mermaid After

I know what you’re all thinking – Ursula? Bear with me, it’s worth it.

Ursula From The Little Mermaid After

Captain Hook From Peter Pan Before

Captain Hook has always had a sick mustache and luscious hair. Don’t @ me.

Captain Hook From Peter Pan After

Princess Jasmine From Aladdin Before

Jasmine has always been a style icon. Her ponytail was way ahead of its time, and her outfit was always an envy of mine.

Princess Jasmine From Aladdin After

Ugh, Jasmine, you are perfect. Don’t change a thing about yourself. Still an icon.

Aladdin From Aladdin Before

Aladdin wasn’t afraid to rock a vest without a shirt. That gave him a certain level of rebellious hotness. Can you handle it in 3-D?

Aladdin From Aladdin After

Aladdin’s open-vest look has certainly reached a whole new level… or world. Yes – I had to.

Is it me, or does he look kind of like Jake Gyllenhaal?

Jafar From Aladdin Before

Jafar rocks his cape. Not many men would have the confidence he has while wearing one.

Jafar From Aladdin After

This proves he doesn’t need a cape to be confidently handsome!

Esmeralda From The Hunchback of Notre Dame Before

I always understood why so many people crushed on Esmeralda – the girl is entrancing! Also, those waves in her hair are so effortless!

Esmeralda From The Hunchback of Notre Dame After

Wow, wow, wow. I want this outfit – it looks like a comfy summer concert get up!

Hercules From Hercules Before

Hercules has always been a hunk who never let gender norms stop him from feeling confident and manly in a dress!

Hercules From Hercules After

Megara From Hercules Before

Meg doesn’t need muscles – her strength is her beauty and the ability to perfectly match her eyeshadow to her dress.

Megara From Hercules After

Talk about a goddess! I would let her throw shade at me any day!

Hades From Hercules Before

Hades as a real person? Is it even possible? Just trust me. Click on.

Hades From Hercules After

Okay, Hades! I am here for these punk rock vibes. Doesn’t he look like he should be on tour with Twenty One Pilots?

Merida From Brave Before

Merida’s fiery red locks match her fiery personality, and that makes her a LEGEND.

Merida From Brave After

Wait, her hair can get even better?! And look at how striking her eyes are! Jealous, much?

Mulan From Mulan Before

How could you not be true to your heart when you see the beauty of Mulan?

Mulan From Mulan After

Mulan, your reflection shows you are beautiful inside and out.

Captain Li Shang From Mulan Before

Perhaps one of the most popular Disney hunks, 2-D Li Shang is already a snack. Sit down if you’re not already, ’cause we’re bout to serve you a whole entree.

Captain Li Shang From Mulan After

Yes, Li Shang. Let’s get down to business.

Rapunzel From Tangled Before

Rapunzel, I see the light in your shiny, golden hair.